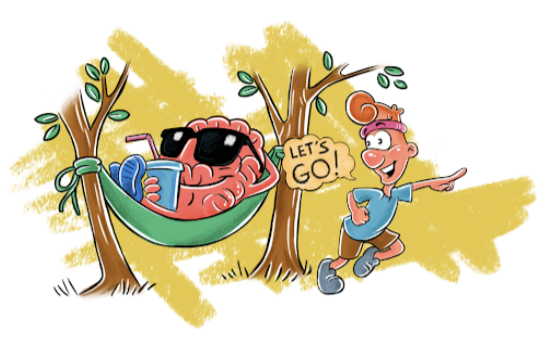 Procrastination : whether we realize it or not, it’s something that all humans tend to do. ‘Maybe later’ or ‘It’s not even due soon, I’ll just start it later’ are terms that we’ve probably said, and have definitely regretted. When people think about procrastination, the first term that comes to mind is laziness. Our mental lethargy and negative attitude towards a task may definitely affect the end result of our work, but procrastination is actually nothing related to laziness. The act of dithering our prioritization actually finds its roots in our deeper biology : the brain.

Procrastination is in fact the result of a constant duel in our brain between the limbic system and the prefrontal cortex. Try thinking about this combat as a wrestling match. Let’s introduce our wrestlers. Team A, the limbic system, also has a nickname, the Paleomammalian Brain (you can call him Pal). Pal, or the limbic system is one of the oldest, strongest, and most dominant portion in the brain, making him much more powerful in this wrestling match. Whenever his complex system desires to make a move, it happens automatically. When Pal’s team, or your body in the case of reality, is telling Pal to flee from the situation that he feels uncomfortable or unpleasant in, Pal is actually the one making these moves. It is his words that are making them feel these thoughts, as the limbic system is also tightly connected to Team B, the prefrontal cortex.

Now, it may seem rather peculiar that rivaling teams are right next to each other! Actually, the prefrontal cortex and Pal are very different parts of the brain. To add on, scientists predict that Team A and B like to believe that they should “keep their friends close, but enemies closer.” Anyways, the prefrontal cortex (P.C.) is a much newer and less developed function of the brain, making it somewhat weaker in this battle. However, the P.C. still does play an essential role in this battle: Procrastination. The prefrontal cortex’s role in the complex system of the brain is to plan complex behaviors that are planned to happen, expressing Team B’s personality, and making decisions for the team (or in the case of reality, your body!)

Since the Pal, or the limbic system, had much more advantages and strengths compared to P.C., or the prefrontal cortex, it very often wins the battle of the brain! However, the outcome of this victory may not be so pleasing to the body. The limbic system’s victory often symbolizes none other than procrastination. Though our brain gives us what we want currently, procrastination definitely is not what we wanted to do in the future. Therefore, procrastination is often seen as the battle between your present mind, and future mind.

Although many scientists and neurologists agree that procrastination is definitely not a good habit to develop, you should never be greatly discouraged or depressed if you’re a master procrastinator. Just remember, it’s perfectly normal for procrastination to occur, since it is rooted deep in our very own biology and neurology.